While still a student at the Roman College, he died at the age of 23 as a result of caring for the victims of an epidemic. He was beatified in 1605, and canonized in 1726.

Prayer of St. Aloysius Gonzaga
to the Blessed Mother 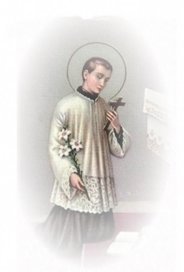 O Holy Mary, my Mistress, into thy blessed trust and special keeping, into the bosom of thy tender mercy, this day, every day of my life and at the hour of my death, I commend my soul and body; to thee I entrust all my hopes and consolations, all my trials and miseries, my life and the end of my life, that through thy most holy intercession and thy merits, all my actions may be ordered and disposed according to thy will and that of thy divine Son. Amen.

God, author of all heavenly gifts, you gave St. Aloysius both a wonderful innocence of life and a deep spirit of penance. Through his merits grant that we may imitate his penitence. Amen

From Military Hopeful To Sickly Child

Aloysius Gonzaga was born the eldest of seven children. As the first-born son, his father assumed that Aloysius would become a soldier, as the family was constantly involved in the frequent minor wars in the region.

His military training started at an early age, but he also received an education in languages and the arts.

As early as age four, he was given a set of miniature guns and accompanied his father on training expeditions so that the boy might learn "the art of arms."

At the age of five, Aloysius was sent to a military camp to get started on his career.

He grew up amid the violence and brutality of the Renaissance Italy and witnessed the murder of two of his brothers.

In 1576, at age of 8, he was sent to Florence, along with his younger brother Rodolfo, to receive further education. While there, he fell ill with a disease of the kidneys, which was to trouble him throughout his life.

While he was ill, he took the opportunity to read about the saints and to spend much of his time in prayer.

He is said to have taken a private vow of chastity at the age of 9.

In November 1579, the brothers were sent to the Duke of Mantua. Aloysius was shocked by the violent and frivolous life-style he encountered there.

Aloysius returned to Castiglione where he met Cardinal Charles Borromeo, and from him received First Communion on July 22, 1580.

After reading a book about Jesuit missionaries in India, Aloysius felt strongly that he wanted to become a missionary himself. He started practicing by giving catechism classes to young boys in Castiglione in the summers.

The family was called to Spain in 1581, st that point, Aloysius started thinking in earnest about joining a religious order. He had considered joining the Capuchins, but he had a Jesuit confessor in Madrid and decided to join that order.

His mother agreed to his request, but his father was furious and prevented him from doing so.

If he were to become a Jesuit he would renounce any right to his inheritance or status in society. His family was afraid of this, but their attempts to persuade him not to join the Jesuits failed; Aloysius was not interested in higher office and still wanted to become a missionary.

Aloysius' health continued to cause problems. In addition to the kidney disease, he also suffered from a skin disease, chronic headaches and insomnia. He was sent to Milan for studies, but after some time he was sent back to Rome because of his health.

On November 25, 1587, he took the three religious vows of chastity, poverty and obedience. In February and March 1588, he received minor orders, and started studying theology to prepare for ordination.

In 1589, he was called to Mantua to mediate between his brother Rodolfo and the Duke of Mantua. He returned to Rome in May 1590.

It is said that later that year, he had a vision in which the Archangel Gabriel told him that he would die within a year.

Living Miraculously Through The Plague

In 1591, a plague broke out in Rome. The Jesuits opened a hospital for the stricken, and Aloysius volunteered to work there. He was allowed to work in a ward where there were no plague victims, as they were afraid to lose him.

As it turned out, a man on his ward was already infected, and on March 3, 1591 (six days before his 23rd birthday) Aloysius showed the first symptoms of being infected.

It seemed certain that he would die in a short time, and he was given Extreme Unction. To everyone's surprise, however, he recovered, but his health was left worse than ever.

While he was ill, he spoke several times with his confessor, the cardinal and later saint, Robert Bellarmine.

Vision Of His Impending Death

Aloysius had another vision, and told Bellarmine that he would die on the Octave of the feast of Corpus Christi. On that very day, which fell on June 21 that year, he seemed very well in the morning, but insisted that he would die before the day was over.

As he began to grow weak, Bellarmine gave him the last rites, and recited the prayers for the dying. He died just before midnight.

Aloysius Gonzaga was beatified only fourteen years after his death by Pope Paul V, on October 19, 1605. On December 31, 1726, he was canonized together with another Jesuit novice, Stanislaus Kostka, by Pope Benedict XIII.

Saint Aloysius Gonzaga's feast day is celebrated on June 21, the date of his death.

In 1729 Pope Benedict declared Aloysius to be the patron saint of young students. In 1926 he was named patron of all Christian youth by Pope Pius XI.

Owing to the manner of his death, he has always been considered a patron saint of plague victims. For his compassion and courage in the face of an incurable disease, Aloysius Gonzaga has become the patron of both AIDS sufferers and their caregivers.

Not long after Aloysius death, on his feast day in 1608, the three daughters of his brother Rodolfo established, under his patronage, a community of women dedicated to education, under the formal name of the Noble Virgins of Jesus.

This community still exists, although as of 2012 it is currently reduced to two members.

FORMED.org
The Catholic Faith on Demand

- Go to formed.org and click on sign up (only works in Chrome and Firefox).
- Select  - I belong to a Parish or Organization.
- Select your parish (using zip 98321 is quicker).
- Register with your name and email address.
- Check that email account for a link to begin.
- Contact the office with questions.

To demonstrate our solidarity with everyone who is impacted by the coronavirus, we will ring the church bells at noon. At this time, we encourage you to pray the Angelus as a family in your homes and conclude with the prayer to Our Lady of Seattle.

The Angelus Prayer (English)
V.  The Angel of the Lord declared unto Mary.
R. And she conceived of the Holy Spirit.
Hail, Mary, full of grace, the Lord is with thee; blessed art thou among women, and blessed is the fruit of thy womb, Jesus. Holy Mary, Mother of God, pray for us sinners, now and at the hour of our death. Amen.

V. Behold the handmaid of the Lord.
R. Be it done unto me according to thy word.
Hail, Mary …

V. And the Word was made flesh.
R. And dwelt among us.
Hail, Mary …

V. Pray for us, O holy Mother of God.
R. That we may be made worthy of the promises of Christ.

Let us pray: Pour forth, we beseech thee, O Lord, thy grace into our hearts, that we to whom the Incarnation of Christ thy Son was made known by the message of an angel, may by his passion and cross be brought to the glory of his resurrection. Through the same Christ Our Lord. Amen.

MASS SCHEDULE
All Masses and Confessions are temporarily canceled until further notice.