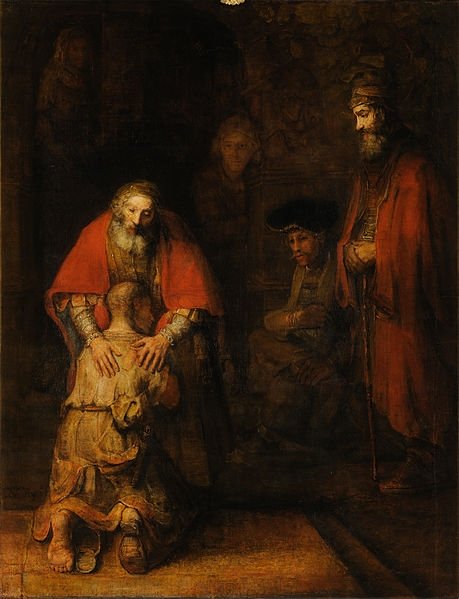 Rembrandt - The Return of the Prodigal Son

Rembrandt van Rijn, the Dutch master, wonderfully conveys the parable Jesus tells in today's gospel in The Return of the Prodigal Son . It was completed not long before his death in 1669. In this ART masterpiece Rembrandt captures in paint some of the details not expressed in words by Jesus' telling of the story. There are many commentaries on this painting by art critics, but my appreciation for this work comes from those who have reflected on its spiritual dimensions.

Perhaps most famous is the short book, The Return of the Prodigal Son: A Story of Homecoming (1992), by the Dutch priest Henri Nouwen.

Consider some of the subtle details. The disheveled son is dressed as a swineherd, and his head is shaved in the tradition of a penitent. His worn feet and broken sandals tell of a humiliating journey he has made. With his fortune ruined and wasted, the only remaining sign of his dignity is the sword at his hip - a symbol that he remains, despite his disgrace, an heir of his father.

Contrition brings him to his knees, and he sinks his face into the bosom of his father. The triangular configuration of the parted red cloak on the father is reminiscent of the flaps on a tent.

We see that the father has opened the door. He signals a welcome. His home is ready to receive back his wayward son. And Rembrandt has styled the father's eyes in a way that suggests physical blindness. But the still figure of an old man is able to recognize his son, for he sees with an eternal vision that looks with love. The pair is bathed in light while the other figures in the painting contemplate this spectacle from the shadows of the canvas.

Not all have a particular identity (perhaps they represent us sharing in this moment of grace), but the standing figure on the right is a key character in the parable. It is the older son. We know he is the dutiful son because he is allied to his father in wearing the same red-colored robe. His hand s are folded together in a gesture of self-confidence, but his arched brow betrays shock at the response his father is giving to the brother he judges undeserving of forgiveness.

The elements of the painting most people find intriguing are the father's hands.

His left hand (viewed on our right) is masculine in appearance. It is thicker, rugged, more defined. His right is feminine...slender, smoother, more delicate. If we think of biblical attributes of God as authoritative, worthy of fear and commanding respect, then that can be seen expressed in the masculine hand.

Whereas traditional characteristics of femininity like gentleness, compassion, tenderness are represented in the father's other hand. Here Rembrandt combines these complimentary notions of God and puts them into a single action that affirms the message Jesus wants us to know in this parable: that the all-powerful God and Father is full of mercy, using His hands to embrace rather than to scold.

A beautiful meditation from Luke's gospel expressed in word and paint for us in this Jubilee Year of Mercy.

The Return of the Prodigal Son is the name of that famous painting by Rembrandt. It is now on display in the Hermitage museum in St. Petersburg, Russia. A woman wanting to study the painting found it nearly impossible to do so for it is hanging in a stairwell. With thousands of visitors it is impossible to pause and contemplate the painting. So to make the best of her visit, she went up and down that stairwell, pushed along by the crowd until her energy ran out.

As she left the museum she had this insight. As we go up and down through all the staircases of life, and as we go from heights to depths, God remains constant, our center, our focus, our home where we shall always find a home. She got the meaning of the parable. With outstretched arms, The Gracious Mystery we name God is wastefully extravagant with love.