Fish are funny creatures. They are always so busy and yet seem so pointlessly busy. Ever on the move, they flit about, dashing and darting hither and thither, full of agitation and enthusiasm. How easily they are alarmed by every ripple, every shadow on the water!

Dare I say, there is a certain “fishiness” about us, in the spiritual sense. We are among the fish Christ sent Peter out to catch. Like fish, we are immersed in a sea of troubles and distractions, easily alarmed and agitated by every ripple of excite-ment, every shadow of doubt that crosses our paths. We expend so much energy on what are, in the end of the day, trivialities.

We can BE TEMPTED, and let ourselves be hooked by unhealthy lures, from cigarettes to status symbols. It is little wonder that Christ showed a marked preference for fishermen when he chose his first apostles.

Today’s story reflects the miracle of our own lives. Through his church, Christ has thrown his net over us, a net of grace. He says: “The kingdom of heaven is like a net that was thrown into the sea and caught fish of every kind.” And like a fisherman’s net it remains unseen beneath the surface. And we are drawn into it, if we allow it to happen. Even in spite of our struggling may we be caught in God’s net .

Today’s miraculous catch of fish recalls that other big catch to which Christ compared the kingdom of heaven. We may be sharp in our estimates of the world and its ways. We might be accurate in our judgment of individuals. We may be keen critics of those whose behavior falls short of the demands of the gospel.

But we cannot limit the infinite sufficiency of God’s grace. There is no telling what size the catch will be until the net is finally drawn in at the end of time. Like today’s catch, it may well astonish even the most seasoned of fishermen.
Who knows what fish will be caught there spluttering and gasping at the breadth of God’s mercy? The “big catch” is Christ’s answer to those prophets of gloom who would put so many outside his reach.

We have a graphic encounter between Jesus and his apostles after his resurrection. It is as if he wants them to recognize him, so that they will have no doubt whatever that he is risen from the dead. And it adds another miracle involving a catch of fish, followed by the human touch of Jesus preparing breakfast for the apostles. This includes the healing of any scars of guilt that Peter bore, because of denying Jesus during the Passion.

For Jesus to cook breakfast for the Apostles is a lovely lesson. They must have remembered that this was the same Jesus who carried a cross to Calvary. We know the phrase “some things never change,” and St Paul tells us that “Jesus is the same yesterday, today, and always.”

Although he has overcome death and now enjoys the freedom of a life beyond death, he still keeps that human touch, a down-to-earth relationship with those whom he calls his friends.
If we read carefully we notice that Peter never actually apologizes, in so many words. It’s almost like the famous line “Love means never having to say you’re sorry .” While this can make sense, in another way Love means saying sorry even when you don’t have to.

St. Peter could have spent the rest of his life confessing his sin, begging forgiveness, or he could simply open his heart and say aloud that he really did love Jesus. Peter was direct and uncomplicated and knew that Jesus loved him.

Because of his failures and being well aware of them, he was the ideal person to lead the others. Earlier, he had recoiled at the notion of Jesus washing his feet, but once he understood the meaning of it he was totally open to this sign of loving service. He had the compassion necessary to be a leader. To be a leader of the followers of Jesus, was to be of service to others.

Notice also that, despite all the drama of Christ’s death, the apostles had returned to work, and were getting on with life. They had moved on from that sense of withdrawal that affected them when after seeing Jesus transfigured in glory, Peter wanted simply to stay there, basking in the glory.

But they had to come down off the mountain, and get on with everyday living. Still, having seen his glory, all was changed for them, and from then on they knew what was their life’s task.

Some people refer to Jesus’ meeting with Peter by the lake shore, as Peter’s Conversion. Others call it his Confession.

The Peter we see here is not the boastful man who thought he was better than the other disciples but a wiser, humbler heart that would not claim more than he can deliver. Peter’s confession is like that of the father of the possessed boy who said to Jesus, “I believe; help my unbelief!” What Peter is saying is “I love you, Lord; help my lack of love.”

In our worship services we often sing hymns that profess our love for Jesus. Peter challenges us today to realize that hymns like these only tell half of the story. The other half is that there is a part of us that does not love, that denies the Lord when our life or our well-being is at stake.

Peter’s example invites us to bring this negative experience to God for healing. So today, let us join Peter in his confession: “I love you, Lord; help my lack of love.”


This Sunday on Zoom, at 10:30am, Mass with Fr. Clarence. Check your email for an invitation link 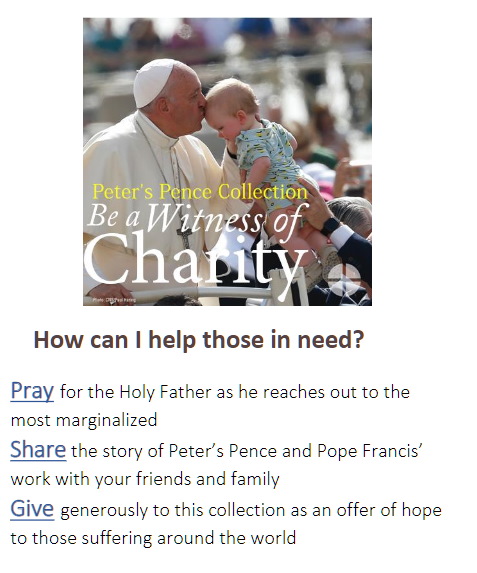 You can donate to the Peter's Pence Collection here...

FORMED.org
The Catholic Faith on Demand

- Go to formed.org and click on sign up (only works in Chrome and Firefox).
- Select  - I belong to a Parish or Organization.
- Select your parish (using zip 98321 is quicker).
- Register with your name and email address.
- Check that email account for a link to begin.
- Contact the office with questions.

To demonstrate our solidarity with everyone who is impacted by the coronavirus, we will ring the church bells at noon. At this time, we encourage you to pray the Angelus as a family in your homes and conclude with the prayer to Our Lady of Seattle.

The Angelus Prayer (English)
V.  The Angel of the Lord declared unto Mary.
R. And she conceived of the Holy Spirit.
Hail, Mary, full of grace, the Lord is with thee; blessed art thou among women, and blessed is the fruit of thy womb, Jesus. Holy Mary, Mother of God, pray for us sinners, now and at the hour of our death. Amen.

V. Behold the handmaid of the Lord.
R. Be it done unto me according to thy word.
Hail, Mary …

V. And the Word was made flesh.
R. And dwelt among us.
Hail, Mary …

V. Pray for us, O holy Mother of God.
R. That we may be made worthy of the promises of Christ.

Let us pray: Pour forth, we beseech thee, O Lord, thy grace into our hearts, that we to whom the Incarnation of Christ thy Son was made known by the message of an angel, may by his passion and cross be brought to the glory of his resurrection. Through the same Christ Our Lord. Amen.

MASS SCHEDULE
All Masses and Confessions are temporarily canceled until further notice.