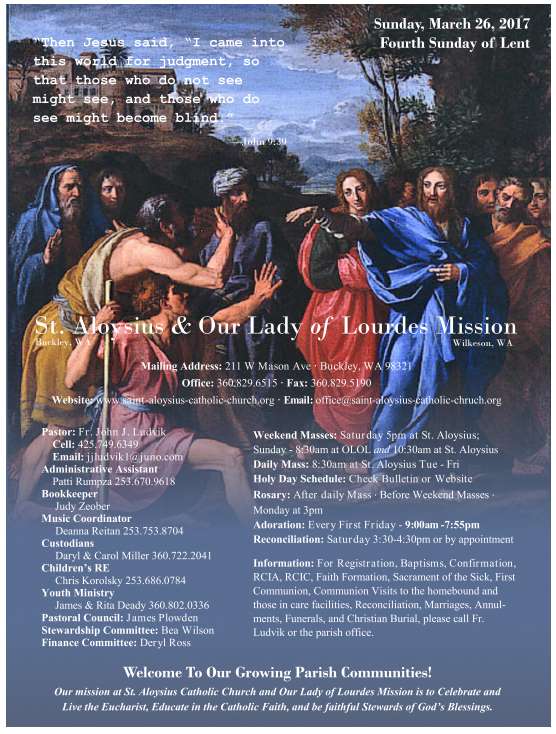 Among the things I learned when Chuck Berry died last week—at 90! If you can believe it—was that “Johnny Be Good” was one of the records they included in the 1977 Voyager Launce to find life elsewhere in the universe.

The idea was that space aliens would play this record—that, in itself, would be a trick—and learn about us, and hopefully communicate back to us in a way we could understand. It’s funny to imagine aliens staring at this record wondering what a record player might be like. In fact, we have people alive now who have never seen a record player work.

But the questions continue: how do we communicate with what we can barely imagine?  How can aliens possibly imagine us?  It would be like seeing something we never saw before, like something totally new in our experience.


That, I think is one of the points in John’s powerful story of the man born blind. He does something he could not remotely imagine: he sees. Not that he sees again; no, he sees for the first time.

Perhaps artists test the limits of imagination in their painting or film-making, things beyond the realm of the conceivable. No matter how we look at it, it has to be like a gift.  Smack out of nowhere.

“The only thing I know is that I was blind, but now I see.”

The Scriptures are telling us that’s the kind of change God wants to give us, the transformation of our lives. We think that this will happen when we die and go to heaven, but faith says that our transformation begins right now, in our present lives.

Well, think of the times we had breakthroughs and came to see everything in the world in totally different ways. Say, the first time we experienced love. Or the first time a big light went off in our heads and we under-stood ourselves in a new way. Or, as Lent is saying, the ongoing process of conversion in our Catholic lives.

The very same thing that we saw before—the same chores, the same daily schedule, the same people—now becomes something different.

This now-seeing man is astounded. “The only thing I know is that I was blind, but now I see.” He not only sees, he sees why he’s alive. He sees life’s purpose. He sees God in a new way. His relationships with everyone are changed.

So great is this transformation that he will not even think of selling it short: when they come after him, he holds his ground.  “My life is changed.  How are you going to explain that?  Maybe you want to be converted too?”

His parents are more practical. When the authorities come after them, they back off: don’t’ bother us, they say, bother our son. Perhaps they represent a part in all of us to not get excited about faith. To take it in stride. To put it on the back burner.

You would think the parents would jump for joy on seeing their son see for the first time. But the price is too high. Faith is not worth enough to pay that price.

Lent asks us two questions: Can we acknowledge the transformation God is bringing about in our lives? And: Is not this a gift so great that we would pay any price for it?

The blind man sees. No one is going to take this new sight, his faith, away from him. But so often we take our own faith away, by putting it on the back burner, not fully living it, and not letting it transform our vision every day.

It isn’t Beethoven who needs to “Roll Over,” as Chuck Berry sang. We need to roll over, for a renewed experience of grace in our lives, that precious relationship with God that Jesus brings to us. He doesn’t just touch our eyes; he enters our lives, fills them with himself, and then says that we too are “sent” to bring his vision to our world.

The miracle of the man born blind is an unforgettable story, but it’s about more than a bodily cure.

The evangelist tells of the inner journey of a man lost in darkness, who found in Jesus the Light of the world. The blind man’s name is not known. We know, however, that he was a beggar who was blind from birth and used to beg alms outside the temple. He has never seen the light. He cannot even find his way towards Jesus. His life has been spent in the dark and his future offers no hope at all.

One day, however, Jesus entered his life. The blind man was so desperate that he let Jesus work on his eyes. He didn’t know Him but he trusted in his healing power. He followed his instructions and went off to wash his eyes in the Pool of Siloam, and his sight was restored. That meeting with Jesus changed his whole life.

The blind man’s neighbors found him a changed man. He explained to them the whole experience: “A man called Jesus has cured me; that’s all I know.” He could now see because his eyes were open.

The Pharisees, versed only in the written Laws, asked the cured man all sorts of questions about Jesus: “What have you to say about Him?” The man told them what he felt about Jesus: “He is a Prophet.” What he had received could certainly come only from God.

Such is the faith of so many simple people who come to believe in Jesus. They know little about theology, but they know that such man must come from God.

Little by little, the beggar was left alone by himself. His parents did not know what to make of the whole affair. “He is old enough, ask him.”

The Jews expelled that poor man from the synagogue. Jesus, however, never abandons anyone who seeks and loves him. When Jesus heard that they had driven him away, he went looking for him. He always knows where to find those who are looking for Him.

When he finds the man that nobody seemed to understand, he simply asked him one question: “Do you believe in the Son of Man?” Do you believe in this New Man, completely human because he is an expression and reincarnation of the inscrutable mystery of God? The blind man was certainly well disposed, but he still had to ask: “Sir, tell me who he is that I may believe in him.”

When Jesus told him: “You’re looking at him, he’s speaking to you!” the blind man’s inner eyes were opened and, falling on his knees, he said: “Lord, I believe,” and worshiped him.

It is only when we listen to Jesus and are guided by him, that we find ways to a fuller and more genuine faith.