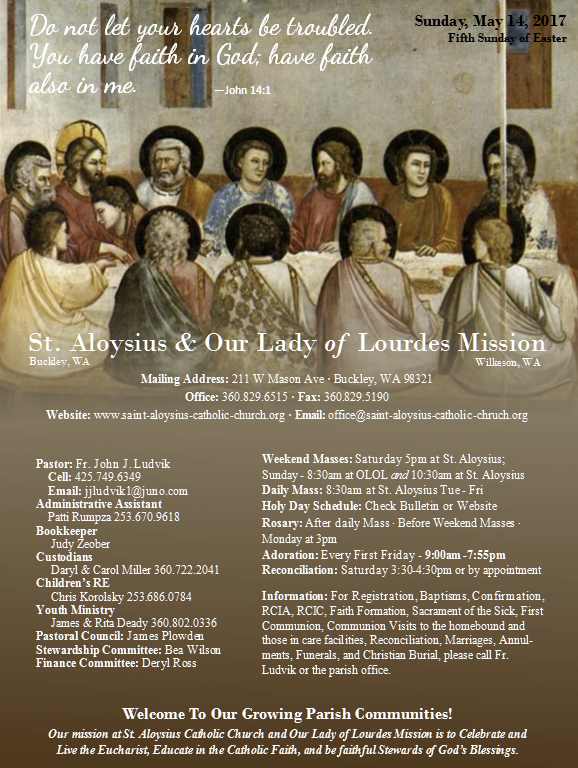 Today we thank our mothers, pray for them and honor them by celebrating Mother’s Day and by offering our mothers on the altar of God.

Today’s readings tell us how the early Church accepted the challenge of keeping Jesus’ memory alive by remaining a dynamic Christian community, bearing witness to Christ by their unity, fidelity in worship and spirit of loving and humble service.

Today’s Gospel introduces Jesus as the Way to God, the Truth to be accepted and the Life to be shared and lived.

Church documents recommend that the Gospel be the center of homilies but I would like to reflect on the Pope's Visit to Fatima this weekend.
He offered a prayer at the spot where three shepherd children reported seeing Mary in a field 100 years ago,  and Pope Francis asked Friday that humanity might have the courage to choose a culture of encounter over a culture of conflict and would "tear down all walls."

In his first visit during a 25-hour trip to this famed center of Catholic pilgrimage, the pope asked that society might follow the example of Jacinta and Francisco Marto, who after seeing Mary on May 13, 1917, gave themselves over to communicating her call for peace in the midst of World War I.

Before a statue of Mary at the Sanctuary of Our Lady of Fatima, the pope prayed that in following the Martos' example "we will travel all the roads, we will be pilgrims on all paths, we will tear down all walls and overcome all boundaries."

Francis also prayed that humanity would realize that "God dwells in the midst of the poor yesterday, today and for all eternity."

The pope made the prayer May 12 in the sanctuary's Chapel of the Apparitions, built over where the 7- and 9-year-old Martos and their 10-year-old cousin Lucia dos Santos said they had seen Mary appear six times starting that May a century ago.

The May 12 prayer was the first part of a relatively light schedule the pope is keeping during his two-day visit to Portugal. Unlike other trips of his pontificate, in which the pope has delivered complex geopolitical messages, Francis undertook  what the Vatican has called an "apostolic pilgrimage."

The pope told journalists traveling with him on the papal flight to Portugal that his trip to the country would be "a journey of prayer, an encounter with the Lord and the holy Mother of God."

Upon landing at the Monte Real Air Base, Francis had a brief private meeting with Portuguese President Marcelo Rebelo de Sousa at the air base and then headed directly to Fatima by helicopter.

Later Friday evening, Francis recited the rosary with crowds at the sanctuary, estimated to include about a million people.

In brief remarks after he blessed some candles in front of the chapel, the pope told the pilgrims not to treat Mary as "plaster statue from whom we beg favors at little cost." The pope also told them that God emphasizes mercy over judgment.

"Great injustice is done to God's grace whenever we say that sins are punished by his judgment, without first saying -- as the Gospel does -- that they are forgiven by his mercy!" he said.

"Mercy has to be put before judgment and, in any case, God's judgment will always be rendered in the light of his mercy," said Francis.

Saturday, the pope celebrated an outdoor Mass where he  also canonized the Marto siblings, who both died only a few years after seeing Mary. Dos Santos, their cousin, became a nun and died in 2005 at the age of 97.

Tens of thousands of pilgrims arrived in Fatima over recent days so they could be present for Francis' trip. After landing at the sanctuary May 12, the pope rode among the crowds in the pope-mobile.

As the pope approached the sanctuary’s chapel he presented the statue of Mary there with a bouquet of flowers.  He then stood in prayer before the statue, his head bowed, for eight minutes.

Local officials   also assured the pope that his trip here will have a lasting legacy. They renamed the area soccer stadium the Estádio Papa Francisco, unveiling a small plaque to mark the change as he landed in Fatima. It is the 100th Anniversary of Fatima and I am glad I am able to share some thoughts with you today.

Today Jesus tells us he is a mirror to the Father, and in our sharing in the Annual Catholic Appeal we are invited to look at Christ and to be his hands, to reach out to the needs of the Archdiocese and also to our parish. The task before us is one of discernment as it was for the Early Church.

We, like the seven deacons in the first reading, are called to serve the Church and to live its mission. Most of the 7 named to service were obscure but played a role in the community.

Stephen got a dramatic speaking part later, but he would become the first martyr of the Church.

Christian discernment is looking into our heart, listen to Jesus speak to us, and like the second reading today, we are like stones with Christ as the gravity that draws us together to be community.

If we want to take these Scriptures seriously in this time of preparation for the feast of Pentecost, we must ask how they apply to our church community of the 21st century. The Greek-speaking Christians and the widows among them were probably not considered the "mainstream" of the primitive community, but when they spoke up, the community responded by expanding its pool of ministers.

As we hear about the unmet needs of the Greek-speaking widows, we should find it impossible to ignore their contemporary counterparts in the Middle East. We must ask ourselves as Christians how we are calling the community together to respond to their needs. When we hear that we are called to live our vocation as a priestly people, we need to think about what that implies for our ecclesial situation today.

In December of last year, the National Catholic Reporter reported that the Chicago archdiocese has 766 priests to serve 2.2 million Catholics today and that they project having 240 priests in 2030. This reality, mirrored in almost every diocese in the country, if not in the whole world, demands that we ask ourselves as Catholics how we are calling our community to discern ways to respond to our people's unmet hunger for sacramental ministry.

When we look at our world, we can well feel that the problems of evil and injustice are insurmountable. That's a reasonable conclusion for anyone who does not have faith. But Christian faith is founded on trust that God works in history to bring about the unimaginable.

Those who choose to accept Christ's invitation to place their faith in him and the Father can believe that the true way to life is found by following him through the confrontation with evil into a victory that only God can bring about.

The Gospel tells us that Christ gave his life for us and has entrusted us with his mission. In turn, he asks for our trust so that as we take on his mission, we will bring it to fruition in new and greater ways, ways as faithful and creative as those devised by our Christian ancestors.

God, grant us the courage to change the things that only we can change and only with your grace.

We are moving towards Pentecost and the sending of the Holy Spirit.  It will be good these days to pray with the work of the spirit within the Church and within each one of us.  We have celebrated our having been brought into Christ by our baptisms.  We are again and again reminded of our call to serve in the Church.

Please Make Your Gift to the 2017 Annual Catholic Appeal